The Behavior You Forgot to Train: Stand 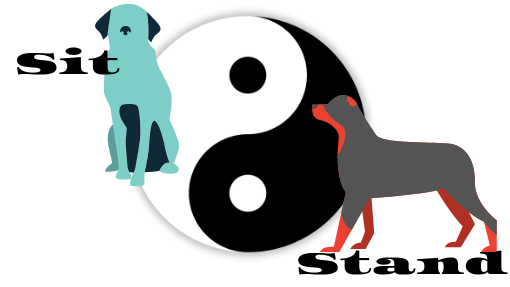 Stand and Sit balance each other like Yin and Yang. Sit is often the first thing a puppy is taught: sit equals a good dog. Stand should be taught as the counter-balance to Sit. Yet, dog owners often neglect Stand.

They see it as the dark side. It’s too dynamic. Too easy for a standing dog to change from stillness into action. Too easy to go from four-on-the-floor to jumping all over us. So, instead of teaching dogs to stand still, we subvert stand into “start walking.” A pity, because standing still is a such a valuable skill for every dog to have.

When WCRL Rally was updated, the Sit to Stand exercise was made mandatory on every Intro and Level 1 course. The Level 2 exercise “Moving Stand-Walk Around” asks the dog to stop and stand while we continue walking around the dog in a counter-clockwise circle. Dog and handler walk forward together once the handler returns to heel position. In Level 3, the Moving Stand skill asks the dog to remain standing even as dog and handler halt in unison. This Moving Stand skill is always presented as the first part of a Moving Stand-Leave Dog and Recall-type exercise.


The Mechanics of “Stand”

Standing still is a very active position. Don’t believe me? Stand up now and close your eyes. Do you feel all the micro-motions your core muscles make to keep you upright and still? The same holds true for your dog. Standing still is hard work.

Weight should be distributed equally on all four feet and the spine should be in straight and level. Head should be held at a natural height with the dog’s nose pointed down or straight ahead. (Remember, when we taught sit, we lured the nose up, so the butt would come down.)

In moving from sit to stand, we want the butt to lift off the ground without the dog stepping forward. When luring a dog from sit to stand, keep your lure even with or slightly lower than nose level. Watch the rear end of the dog, since that’s where the action is. Resist the urge to step forward yourself.

Mark the engagement of the muscles of the hind end with a click or a word. Reward the dog while they are standing. If you have a dog who reverts to sit when you treat, try placing the treat very low or even on the floor. Rewards offered in this position generally encourage the dog to stand.

With puppies or dogs just learning the skill, we just require them to stand for a moment before stepping forward. As their skill improves, we look for longer duration of the stand. Feed, feed, feed treats to your dog as they stand next to you. Practice correct form so that your dog builds muscles and muscle memory for the feel of this exercise.

Just getting started in Rally?  Or starting a new dog in Rally? Train with Amee to learn the nuances of the new WCRL Rally.