I Didn’t Have Time to Train 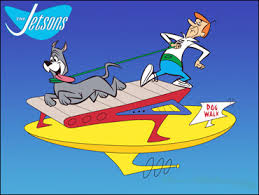 “I didn’t have time to train this week.” When I hear a student say this, my brain flashes to a science fiction universe where dogs are kenneled in suspended animation, waiting timelessly until their owners have time to train.

Back in the real world, even though my student thought he hadn’t been training, his dog had been learning.  She had studied hard all week, practicing the rules of life in their household.

Dogs don’t differentiate between “training” and “living.”  They are learning all the time! Their daily “To Do” list is about learning how to be more successful. What makes us to hand out the cookies? What makes us fill the food bowl? Open the back door?  Toss the ball? Pay attention to them? They are four-legged scientists constantly experimenting on their world and on us.

Do the dogs wonder why sometimes things they do with us include lots of treats while other times those same behaviors are ignored?  I wonder what they make of our artificial distinction between “training” and “living.”

Our dogs are always doing

Does jumping up get you to pay attention?  The dog will do more jumping up.  Because attention, even bad attention (such as you saying “No, get off!”) is better than being ignored.*

Does dragging you by the leash get the dog where he/she wishes to go?  You better believe that your dog is going to get better at dragging you around. 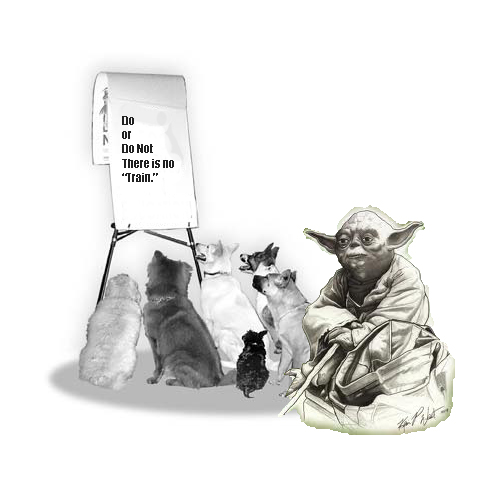 I suggest you stop “training.”  Instead of training, live consciously  with your dog. Consistently enforce good behavior. Insist that every interaction happen on your terms, or not at all.  Doors don’t open unless the dog is sitting.  Dogs don’t walk through an open door until you say “OK.”

You never take another step with a leash that’s pulled tight.  Never give a look to a dog who is jumping on you.

You can be consistent without being mean, without being cruel, without using force or punishment.  You simply pay attention and insist on good behavior every single time—no matter how long it takes.

I promise you this will work. Pick a behavior and stick with it.  Every instance, every time.

Be patient.  Be friendly.  Be cheerful. Be patient! The first time you insist on “loose leash every step”  or “sit until I release you to go out the door,” it may take you a long time to get anywhere. But each subsequent incidence will take less time.  And soon, because you are consistent in your expectations, the behavior you have consistently insisted on will become effortless.

*Unless the response is sufficiently punishing that the dog will seek to avoid the punishment.  Personally, I won’t go there with a dog. It’s not nice; it’s not necessary; and in the long run it doesn’t result in behavior I want.